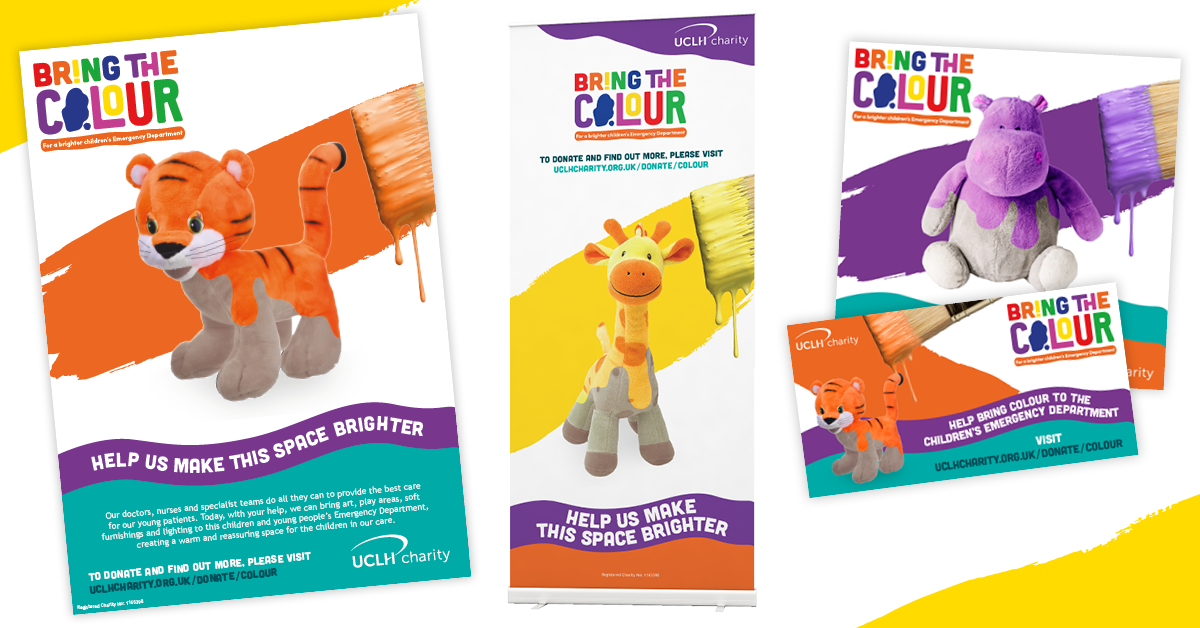 ‘Bring The Colour’ to the UCLH Emergency Department

The challenge from UCLH Charity was to create a brand and campaign that would motivate a fundraising audience whilst at the same time speak to the cause – the development of the Emergency Department at UCLH. ‘Bring the Colour’ is all about improving an intimidating and scary environment, for those who need to use it at a potentially intimidating and scary time. Let’s hope it’s a success.

The Community unites on Yom HaShoah, lighting Yellow Candles to remember and honour those who perished in the Holocaust.

Every year, Maccabi GB distributes yellow memorial candles across the Jewish community and beyond in advance of Yom HaShoah. Each Yellow Candle comes with an individual information card, including the name, hometown, as well as place of death and age of a Jewish person who perished during the Holocaust.

On the night, #Yellow Candle trended first on Twitter, with people from around the world posting photos of their lit Yellow Candle on social media.

A few months ago it became clear that our client, March of the Living UK, would not be able to take Holocaust survivors or participants to Poland as part of its annual March.

The March itself usually takes place on Yom Hashoah (Holocaust Remembrance Day) and covers the 3km from the gates of Auschwitz to the gas chambers at Birkenau.

We worked with MOTL on an idea that bought the March much closer to home. 5 survivors and 5 well-known personalities in a Covid-friendly environment. Walking, talking and most importantly witnessing. (As Elie Wiesel said, “Whoever listens to a witness, becomes a witness”)

The Community Security Trust's campaign has seen the largest fundraising total by a Jewish charity during the pandemic. Every donation was doubled by supporters of the charity which works to protect British Jews from antisemitism and terror. The initiative was backed by high profile celebrities and public figures, including David Baddiel, Eamon Holmes and TracyAnn Oberman.

After 15 years in Pratt Mews, it feels like the end of an era. But the start of a new one... Creative & Commercial is moving from Camden to Primrose Hill in the new year. We hope that sooner rather than later you'll be able to come and see it for yourself... 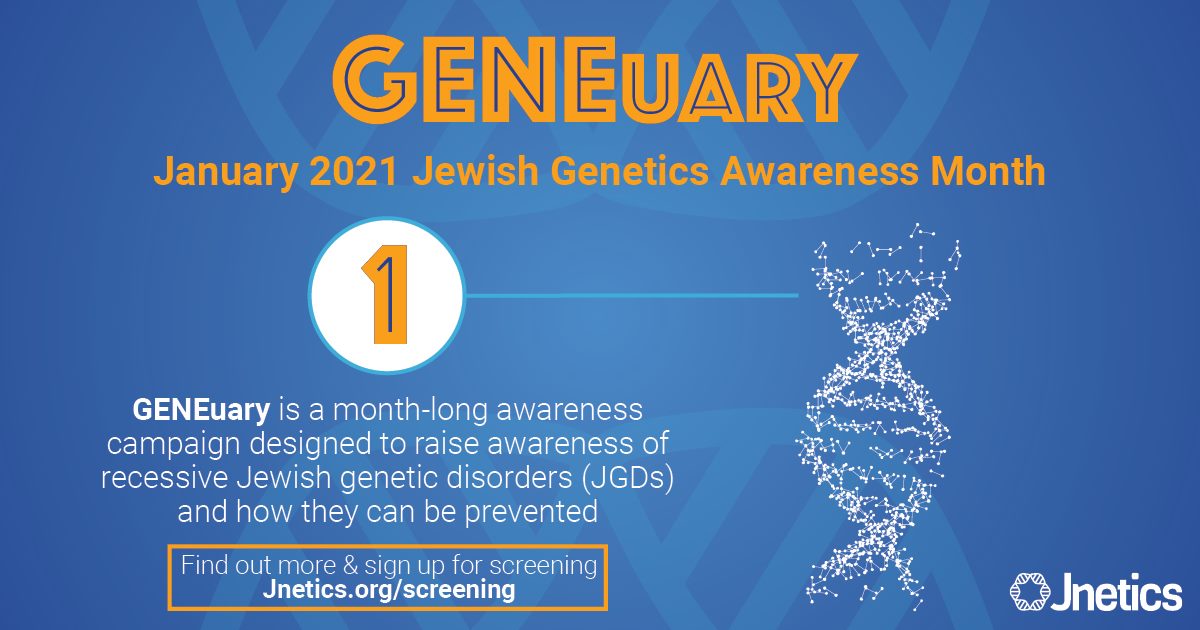 It was a pleasure working with our friends at Jnetics for the Jewish Genetics Awareness Month 2021.

'GENEuary' is a brand new month-long awareness campaign, designed to raise awareness of recessive Jewish genetic disorders and the importance of carrier screening in their prevention.

One in five Jews of Ashkenazi origin are thought to be healthy carriers of a severe recessive JGD, and carrier screening identifies those at risk of passing one or more of these disorders on to their future children.

While there haven't been any doughnut deliveries this year, we went virtual for the C&C doughnut day 2020. See below some fun activities we have for you. END_OF_DOCUMENT_TOKEN_TO_BE_REPLACED

Back. To the future?

From Charlotte  It's been less than two months since I came back to Creative & Commercial after maternity leave, and pretty much the first time I've been able to take stock of how it's going. I haven't stepped into our office for over a year - and whilst i don't miss the physical premises, I certainly miss the opportunities for creativity and collaboration which come from in-person interaction. Nonetheless our amazing team has harnessed new tech and 2020-friendly ways of working in order to keep sharing ideas, developing skills and innovating for our clients. END_OF_DOCUMENT_TOKEN_TO_BE_REPLACED 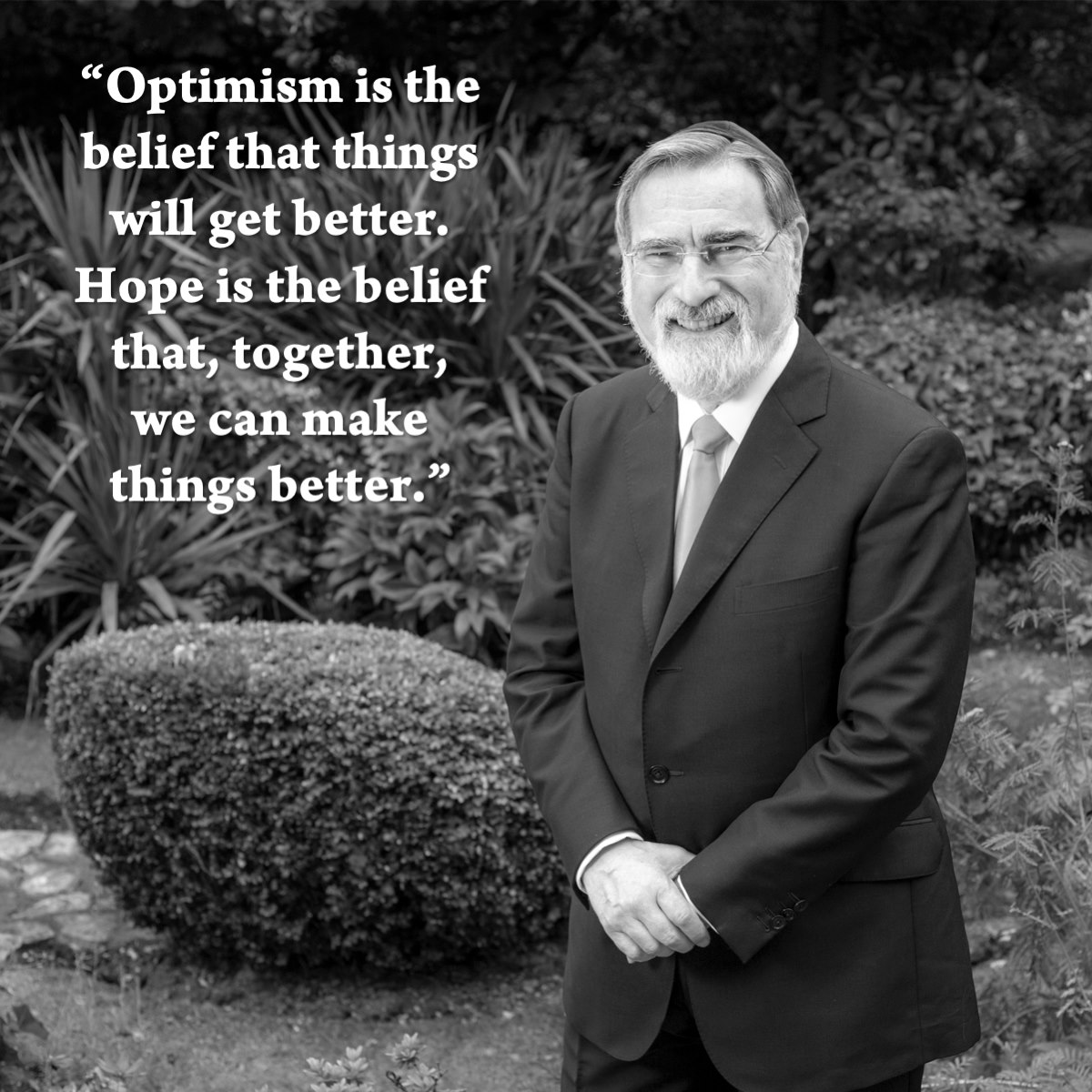 It was a huge honour and privilege for Creative & Commercial to be asked to produce the broadcast that went out on 6th December 2020, to mark the completion of the 'shloshim'* for Rabbi Lord Sacks. We were able to incorporate tributes from more than 50 individuals, from across the world. And, in 3 days, the programme has had tens of thousands of views

*Shloshim is the intense 30-day period of mourning that is observed after a bereavement according to the Jewish tradition.

MDA UK raises £2m in 36-hour campaign to save lives

We are proud to join the #InvisibleXmasParty initiative and donate from our unspent Christmas party budget to Hospitality Action. We encourage everyone to support this great campaign and help raise funds for members of the hospitality industry who need it most. Read more on the initiative here.

Chai's 36-hour appeal 'The Big Campaign' reached its £1.5 million target in six hours. The charity has received donations from more than 13,000 people from all over the world, with a peak of 35 donations a minute. A group of sponsors agreed to match all of the early donations made within the first 36 hours. 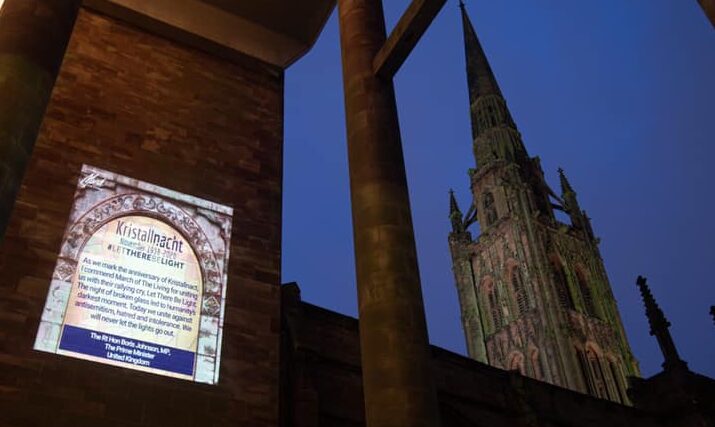 We are honoured to have worked with March of the Living UK to deliver the #LetThereBeLight campaign onto the walls of Coventry Cathedral. The event was part of the International March of the Living Global Interfaith Kristallnacht Campaign commemorating the 82nd anniversary of Kristallnacht -The Night of Broken Glass – when the destruction of over 1,400 synagogues began. More information on the campaign can be found here.

Anniversary Edition of Together magazine

We are delighted that the Anniversary Edition of Chai Cancer Care Together magazine is out now! Having worked on this special project for 15 years running, we are continuously inspired by Chai's story and all their work. You can read all magazines at: https://lnkd.in/d3VPQvp

To survive this crisis, charities need a brand-new approach

From Barry Brands strive to make themselves relevant, but what do you do when there is only one event in the news cycle — and that event is a killer pandemic? At the start of the recession that followed the 2008 financial crisis, McKinsey, one of the world’s leading management consultancy firms, analysed the behaviour of nearly 700 businesses during previous downturns. The findings were stark. Approximately half of the companies that entered these downturns as leaders ended up lagging behind when the economy picked up. Read the full article on The Jewish Chronicle website.

Get animated with C&C

We like to tell stories. Stories of achievement and success. Of need and generosity. Of hope and happiness. Of what has happened and what happens next. These stories take on different forms - online, in print, in film and in person. And no two stories are ever the same. Right now everyone’s got a story to tell. And we want to help you tell it. To all those who should be hearing them - whether they know it or not.Of course, we can’t send round a film crew right now. But that doesn’t make us any less committed to telling your story. In fact, it’s got us even more animated… We’ve been using animation as a tool for storytelling for a while now, with some pretty impressive results. Not just creating the content, but deploying it in the right place at the right time. Combining all our strategic, creative and media expertise with eye-catching and engaging effect. If you’re wondering how to tell your story right now, please be in touch. We’ll work out the best way to do it, together. Creatively and, of course, commercially. 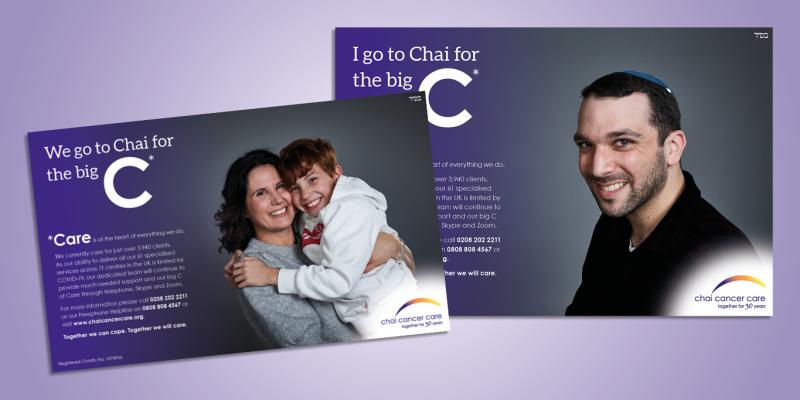 Strange that, with everything else going on, we launched a new campaign today. But here is the start of our Big C campaign for Chai Cancer Care with photography from Adam Lawrence. For years ‘The Big C’ was a euphemism for cancer. Chai is breaking taboos and boundaries and embracing thousands of people each year with the big C of Care.

Meet George, the latest project we worked on with Chai Cancer Care! Bringing tech into fundraising! 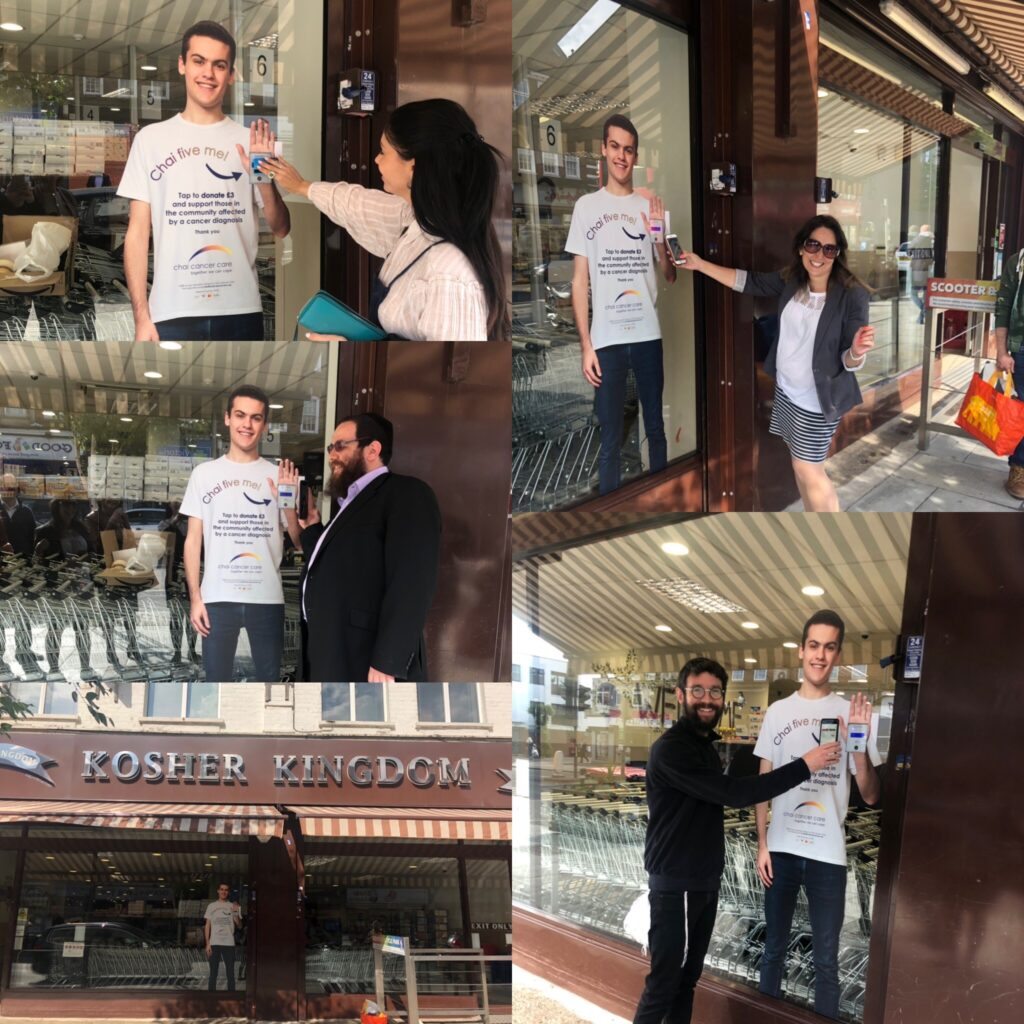 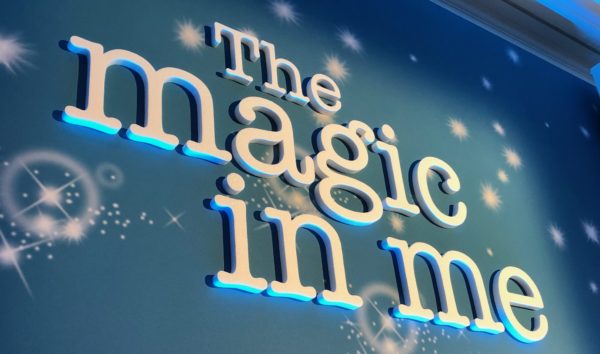 Tikva UK raises £1.45 million at ‘Magic in Me’ fundraising dinner

On Wednesday 15th May, over 270 guests came together for Tikva’s annual ‘Magic in Me’ fundraising dinner at the InterContinental, Park Lane. In excess of £1.45 million was raised for the Children’s homes in Odessa, Ukraine, with the funds going towards continuing the search for at-risk Jewish Children in the region and bringing over 100 new children to Tikva’s homes and schools.

Hasmonean High School managed to raise over £1m in 36 hours, beating the £750,000 target! It was a pleasure working on this project and helping them raise such an impressive figure. The campaign launched with this animation, which we are delighted to have helped develop.

The ORT UK Annual Dinner in honour of businessman & philanthropist Natie Kirsh was held on Tuesday 10th November at the Jumeirah Carlton Towers. More than 300 guests helped to raise over £500,000 towards the ORT network of schools in Israel.